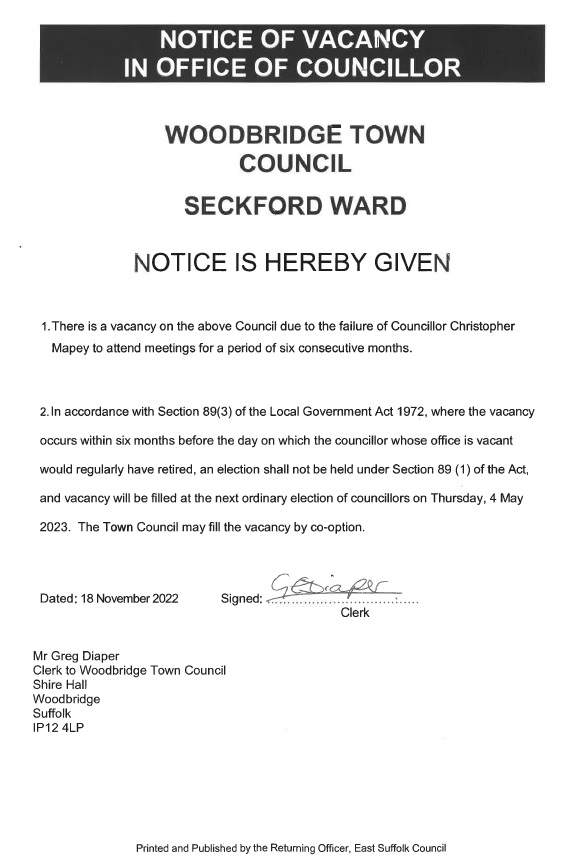 Upon the expiry of the 14 days during which the Notice of Vacancy has been displayed, the Council may co-opt to fill the casual vacancy as a by-election within six months of an ordinary election (May 4th 2023) is not permitted. Unless an extraordinary meeting is called, co-option could take place at the meeting of the Full Council on December 20th.

The Council's debate and vote on the co-option must be conducted in the public section of its meeting. It follows that the candidates, as members of the public, will be entitled to be present during the proceedings, and are welcome to present themselves to those Councillors present.  Provided that the meeting has a quorum, the decision must be made by an absolute majority of members who are present and voting.

Where there are more than two candidates for the vacancy, it may be necessary to run a series of votes, each time removing the candidate who has the least number of votes until one candidate secures an absolute majority. Members must vote by show of hands.

A person is qualified to be elected and to be a Councillor if they are a British, Commonwealth, Irish or European Union citizen and on the relevant day (that is, the day of nomination or election) they are 18 or over. In addition, the person must meet at least one of the following criteria:

(1) On the relevant day and thereafter they continue to be on the electoral register for the parish, or

(2) During the whole of the twelve months before that day they have owned or tenanted land or premises in the parish, or

(3) During the whole of the twelve months before that day their principal or only place of work has been in the parish, or

(4) During the whole of the twelve months before that day they have resided in the parish or within three miles of it.

There are certain people who are disqualified from being elected to a parish council in England and Wales. You cannot be a candidate if at the time of your nomination and on polling day:

(2) You are the subject of a bankruptcy restrictions order or interim order.

(3) You have been sentenced to a term of imprisonment of three months or more (including a suspended sentence), without the option of a fine, during the five years before polling day.

For an informal discussion about the role of Town Councillor please contact the Town Clerk, Mr Greg Diaper, via email townclerk@woodbridge-suffolk.gov.uk or phone – 01394 383599, option 4. Interested persons should confirm to the Town Clerk their name, proof of qualification and supporting information about their request to join the Council no later than December 15th 2022.